It might be a good idea to join our mailing list. Conversation there is in English -- even though this site (and Subsurface itself) are available in many languages, the shared language we all communicate in is English. Actually “Broken English” is just fine… 🙂

We also tend to have some developers hanging out in the #subsurface channel on Freenode.

There are many ways in which you can contribute. We are always looking for testers who are willing to test the code while it is being developed. We especially need people running Windows and Mac (as the majority of the active developers are Linux people). We are also always looking for volunteers who help reviewing and improving the documentation. And very importantly we are looking for translators willing to translate the software into different languages. Our translations are centrally handled at Transifex -- please sign up for an account there and then request to join the Subsurface Team.

If you would like to contribute patches that fix bugs or add new features, that is of course especially welcome. If you are looking for places to start, look at the open bugs in our bug tracker.

Here is a very brief introduction on creating commits that you can send to the mailing list. Much more details on how to use git can be found at the git user manual.

Start with getting the latest source (look at the INSTALL file to find out how).
cd subsurface
git checkout master
git pull
ok, now we know you’re on the latest version. Create a working branch to keep your development in:
git checkout -b devel
Edit the code (or documentation), compile, test… then create a commit:
git commit -s -a
Depending on your OS this will open a default editor -- usually you can define which by setting the environment variable GIT_EDITOR. Here you enter your commit message. The first line is the title of your commit. Keep it brief and to the point. Then a longer explanation (more on this and the fact that we insist on all contributions containing a Signed-off-by: line below).
If you want to change the commit message, “git commit --amend” is the way to go. Feel free to break your changes into multiple smaller commits. Then, when you are done run
git format-patch master..devel
Which creates a number of files that have names like 0001-Commit-title.patch.

When sending code, please either send signed-off patches or a pull request with signed-off commits. If you don’t sign off on them, we will not accept them. This means adding a line that says “Signed-off-by: Name ” at the end of each commit, indicating that you wrote the code and have the right to pass it on as an open source patch.

Header line: explaining the commit in one line

Body of commit message is a few lines of text, explaining things
in more detail, possibly giving some background about the issue
being fixed, etc etc.

The body of the commit message can be several paragrahps, and
please do proper word-wrap and keep columns shorter than about
74 characters or so. That way “git log” will show things
nicely even when it’s indented. 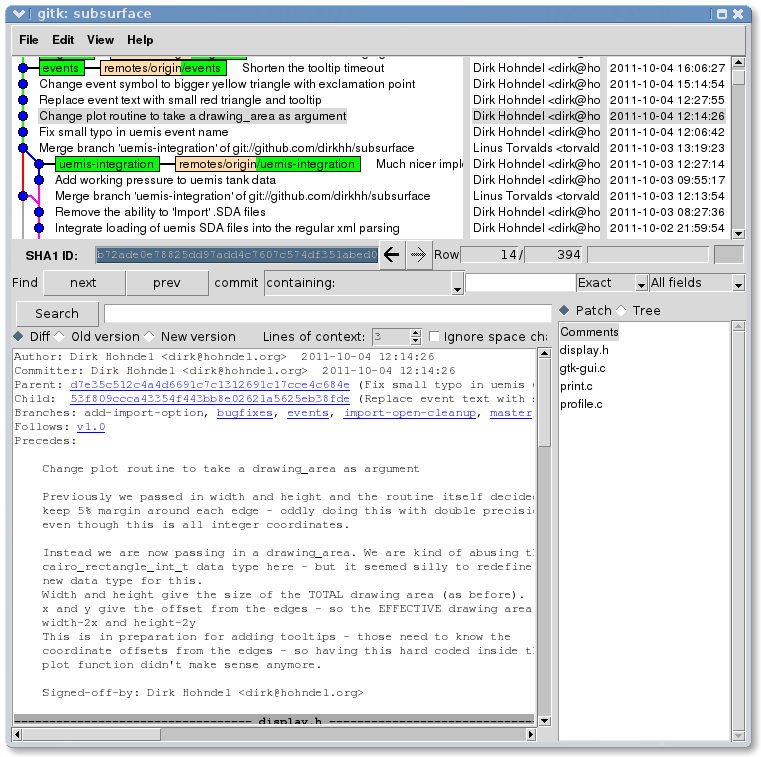